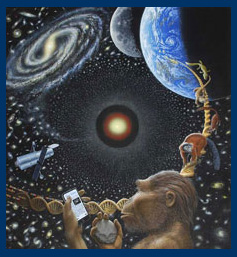 "FROM THE BIG BANG TO THE WORLD WIDE WEB"™ Text by Kathy Schick and Nicholas Toth. Painting by John Agnew. Copyright 2011, THE STONE AGE INSTITUTE®. All rights reserved.

Stars, attracted to other stars by gravity, formed clusters that developed into gigantic spinning discs called galaxies that are usually spiral-shaped (like our own Milky Way) or more elliptical (football-shaped), possibly formed by the merging of two galaxies or more. It is believed that the first galaxies formed around 13 billion years ago, and the Milky Way may be this old. It now appears that most, if not all, galaxies contain a supermassive black hole at their center, and there is a growing suspicion that these galaxies and black holes may be necessarily linked.

HOW DO WE KNOW?

As we peer deeper into space with powerful telescopes, we are gazing back in time as well, closer and closer to the origins of the universe. The Hubble telescopes’ “Deep Space” image of a very small portion of the sky shows very early galaxies forming, and observations of space allow us to estimate the total number of galaxies in the universe.

WHY SHOULD I CARE?

Our Milky Way is one of perhaps 100 billion galaxies, each containing, on average, 100 billion stars. Our sun is one of these stars in one of these galaxies. Dust clouds (nebula) from exploded stars in galaxies were the nurseries for new star and planet formation, including our own solar system, which formed around 4.5 billion years ago (when the universe was already over 9 billion years old).

An article from the New Scientist about the collision of galaxies, including a computer simulation comprised of the photographs taken in space and depicting the collision of the two galaxies:
https://www.newscientist.com/article/dn13766

An informational site from NASA about stars and galaxies:
https://www.nasa.gov/topics/starsgalaxies/index.html

Searching for the first galaxies, a YouTube video about the Evolution of the Universe:  structure and galaxy formation
https://www.youtube.com/watch?v=uY24JAUsy5s

Mather, John C. and John Boslough. The Very First Light: The True Inside Story of the Scientific Journey Back to the Dawn of the Universe. New York: Basic Books. 2008.

Murdin, Paul. Secrets of the Universe: How We Discovered the Cosmos. Chicago: University of Chicago Press. 2009.

The Universe. The History Channel. (A multi-year television series).

Understanding the Universe: Introduction to Astronomy. The Teaching Company. 2007. (96 presentations by Alex Filippenko).

Universe: A Journey from Earth to the Edge of the Cosmos. Quercus. 2008.